What is a reduced sphere?

It is a sphere which has been deformed isometrically so as to diminish the space it occupies. The adverb isometrically means that during the deformation the lengths of the curves traced on its surface are not modified. This amounts to assuming that the sphere is made of a material that can not be stretched or contracted. The celluloid which constitutes the ping-pong balls is a first approximation of an example of such a material. If one tries to compress this type of balls, one observes that they resist to the effort and keep their round forms. We are therefore led to believe that it is impossible to reduce isometrically a sphere. However, if the stress is very strong, the shape of the ping-pong ball suddenly changes; corners and sharp edges appear. A change of shape is thus possible provided that the smoothness of the ball is damaged; its regularity is reduced. 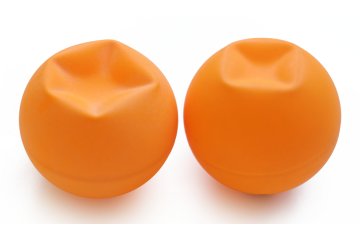 One can distinguish an infinite number of levels of regularity in surfaces. The damaged ping pong ball with imprints has the lowest regularity, that of the zero level denoted by «C⁰». A brand-new ping pong ball holds the maximum regularity, that of the infinite level denoted «C∞». Between these two extreme regularity levels, there exists a whole scale of ascending regularities: C¹, C², C³, etc. For all these intermediate regularities, the surface appears to be perfectly smooth, comprising neither edges nor sharp points. For example, the surface made up of a half-cylinder followed by a half-plane shows an indisputable smoothness, but its curvature exhibits an irregular behavior. Indeed, in contrast to the plane part, the cylindrical part is uniformly curved. Along the connecting line, the curvature thus shows a discontinuity. This can be highlighted by rolling a small car on the surface. At the connection between the two portions, this car will undergo a sudden shock. Its wheels will take off from the ground. The shock betrays an irregularity of the surface. For this reason it is denied access to the C² level. But since it is smooth to the touch, it is not classified either to the lowest level, it belongs to the C¹ regularity level. 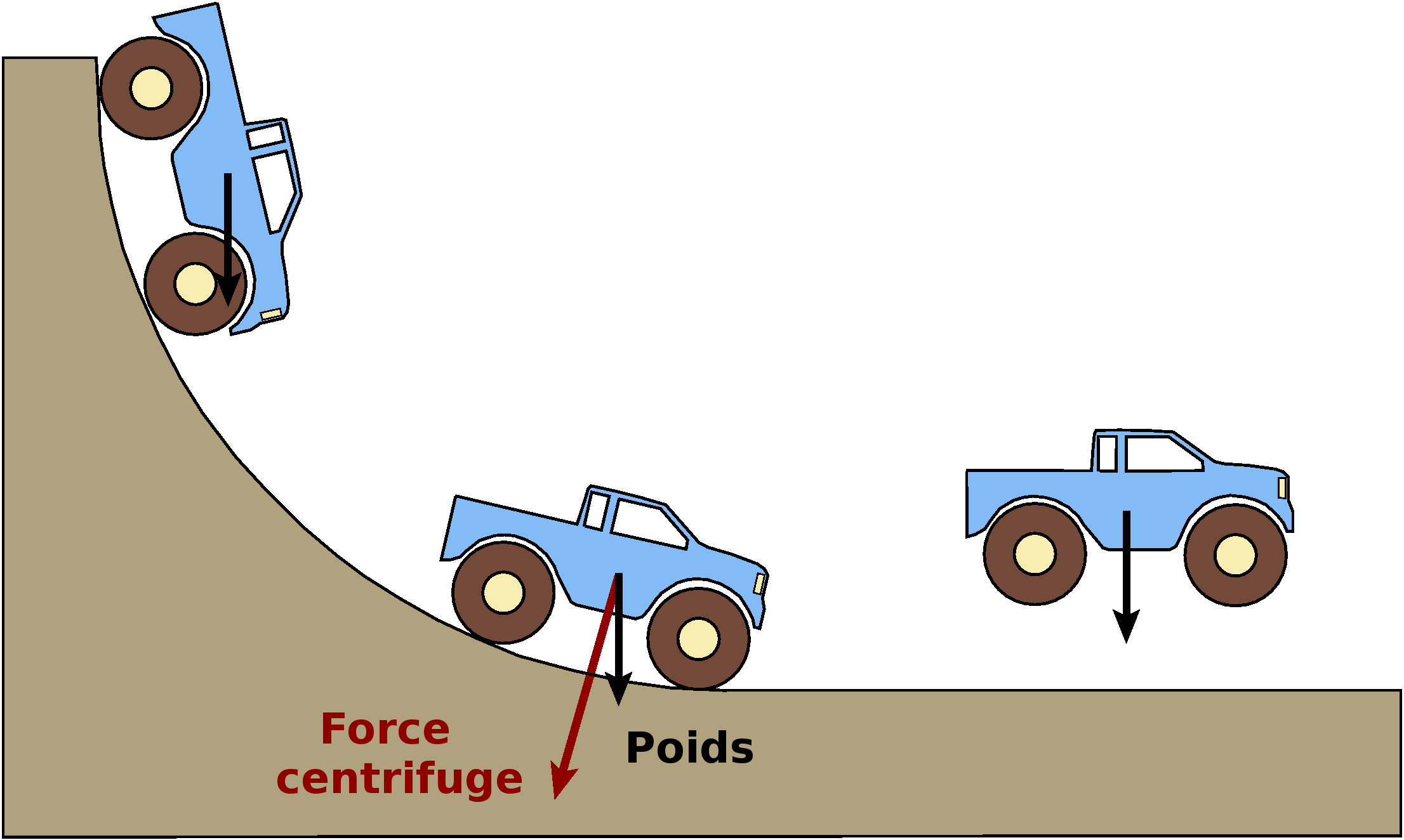 The experience of the ping-pong ball suggests that we cannot reduce a sphere isometrically without lowering its regularity to the bottom of the ladder, at C⁰. This conclusion is widely supported by mathematics. It is possible at each point of a surface to quantify - in many ways - its curvature, that is to say, the way it deviates from the plane situation. In 1827, Karl Friedrich Gauss makes an important discovery: during an isometric deformation, the shape of the surface may change but a particular curvature, now called Gaussian curvature, must remain unchanged whatever happens. However, the calculation shows that the Gaussian curvature of a hypothetical reduced sphere would necessarily be different from that of the initial sphere. It is therefore mathematically impossible to reduce isometrically a sphere. Well, almost! The curvature of Gauss can be defined only for surfaces whose regularity is at least of level C². The argument leading to the impossibility of an isometric reduction can therefore only concern this type of surfaces. The exact conclusion is that any isometric reduction of the sphere will necessarily lead to a regularity of level C¹ at best. 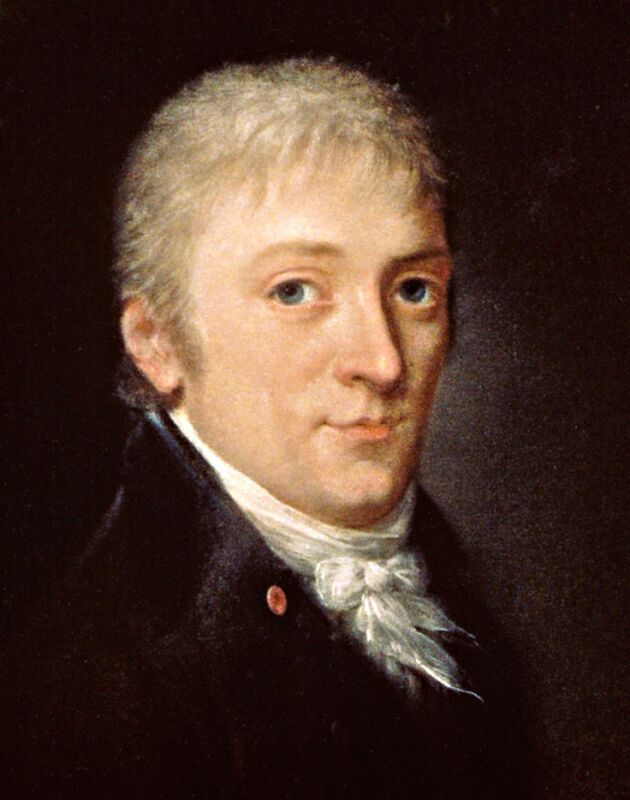 A difference of regularity levels

Mathematics is therefore in harmony with physical experience except that surfaces with C¹ regularity are smooth to the touch whereas damaged ping-pong balls are not. Therefore, the coincidence between theory and experience is not complete. For what reasons? The alternative is simple. Either the mathematical result relying on the Gaussian curvature is incomplete. It would then be necessary to look for new arguments to show that the regularity must go down to the C⁰ level. Or the experiment is deceptive and masks the existence of reduced spheres of regularity C¹. It would then be necessary to exhibit a reduced sphere without sharp edges or points. The general intuition was that such a sphere could not exist and that it was the mathematical argument that had to be perfected. We were mistaken.

It is the mathematician John Nash who was going to reveal how our intuition concerning C¹ surfaces was erroneous. In a resounding theorem obtained in 1954 he shows that such surfaces are radically different from their big sisters of the upper levels. In contrast to them, the C¹ surfaces are too perturbed to allow for a definition of Gaussian curvature. However, this drawback has a positive counterpart, it allows them to pass through the mathematical constraints induced by this curvature and to challenge our intuition by revealing the existence of "impossible" objects, including the one that interests us here: a reduced sphere without sharp edges or points. All in all, the mathematical argument of Gauss's curvature was impeccable, it was the appreciation of the result of the ping pong ball experience that had sinned. 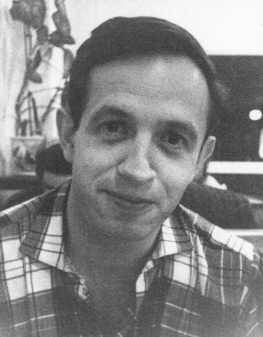 To be precise, Nash's theorem does not concern surfaces living in three-dimensional space, but those living in spaces of larger dimensions which are therefore inaccessible to our view. A year later, however, Nicolaas Kuiper adapted Nash's proof to the case of three-dimensional space. Was it then possible, thanks to this improvement, to visualize these famous reduced spheres? Absolutely not. Why? Essentially because of the presence of two scientific locks. The first one refers to the ingredients of Nash's proof which at the time are obscure, the second one relates to this famous C¹ regularity of which no one understood the geometry. Opening these two locks was going to require time, a lot of work and the ideas of two outstanding mathematicians, Mikhail Gromov and Benoît Mandelbrot. The first one, by revisiting in depth the work of Nash and Kuiper, develops a general theory, the h-principle, which illuminates and puzzles out their proof. The second one, by discovering the fractals, provides the tools opening the way to the understanding of the geometry of C¹ surfaces. 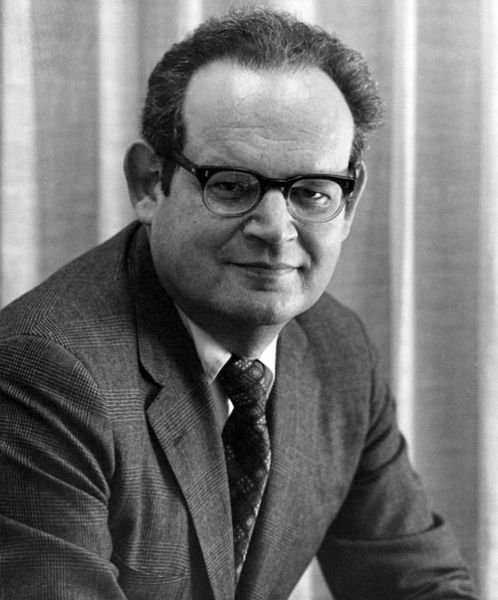 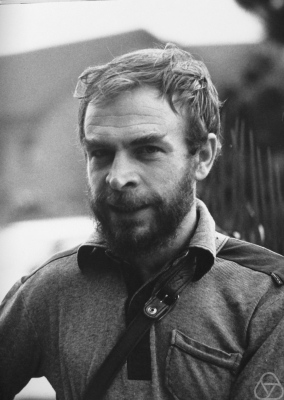 The wall of abstraction

Gromov records his whole theory in a major work, Partial Differential Relations, which appeared in 1986. Still, this book did not receive the expected success. According to the author's own words, «it is practically unknown at the time because it is too conceptual». It must be admitted that the book is very abstract and sometimes hard to believe. In addition to a hermetic theory, it provides a way to build many impossible objects that disconcerts specialists. But the reputation of Gromov is such that these pitfalls has only discouraged them for a time. Little by little the work has been read and admired, the strength of its proposals is now understood and accepted.

A lecture (in French) on the work of Mikhaïl Gromov.

The abstraction of the work has long obscured an essential fact: Gromov's theory is constructive. This means that it can in principle be transformed into an algorithm - that is to say, a sequence of mathematical instructions - enabling visualization on a computer of the «impossible objects» that it constructs. This algorithmic translation is however far from automatic. The abstraction level of the theory allows it to ignore many obstacles. Similarly, the path leading from the algorithm to the visualization has its own obstacles mainly due to the physical limitations of the computers. In turn, these limitations create a cascade of obstacles and artefacts. Despite the constructive nature of the theory, the visualization of a single «impossible object» remains a delicate and uncertain challenge.

From 2013 to 2016, we achieved such an algorithmic transformation in order to explicitly construct a reduced sphere and to understand its geometric properties. For this we have cut the initial sphere horizontally into three pieces: two caps and an equatorial belt. We placed the two caps inside a smaller sphere and we joined them by means of a small equatorial band. This band may be thought of as the third piece of the original sphere that would have been reduced and adapted to the size.

In order to recover the lengths of the initial sphere, there is therefore no choice but to stretch this small band. This stretching takes place iteratively by means of oscillations which stack at infinity. The position, the size and the frequency of these oscillations are calculated so that the surface obtained in fine is a reduced sphere. It has regularity C¹, with no crease. 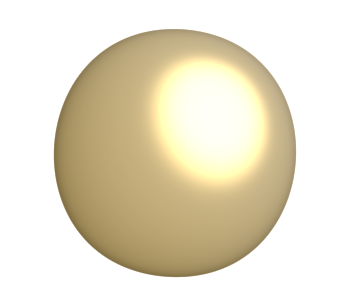 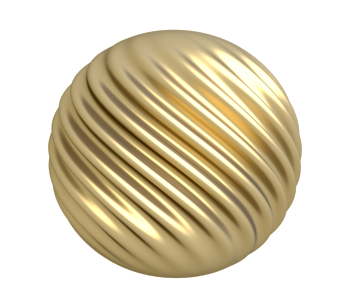 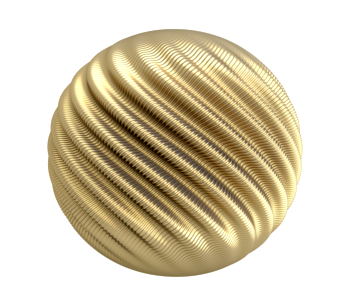 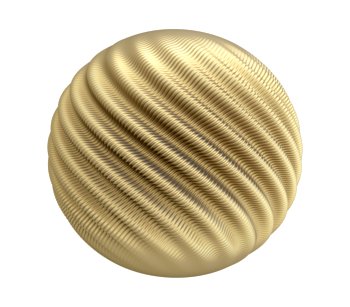 These oscillations recall those already observed on another impossible object that we had visualized in 2012, the flat torus. This is not surprising because the underlying theory is the same In both cases, it is the convex integration described in the famous Gromov's book. Only the object of its application has changed, replacing the torus by the sphere. 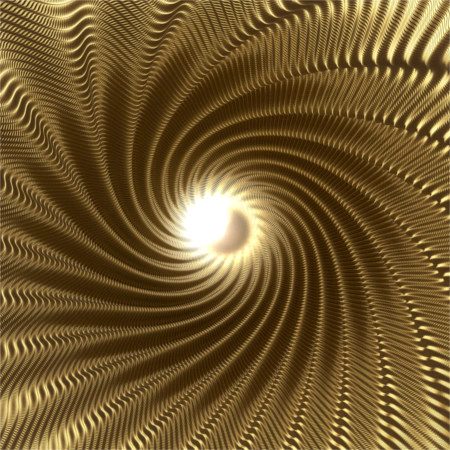 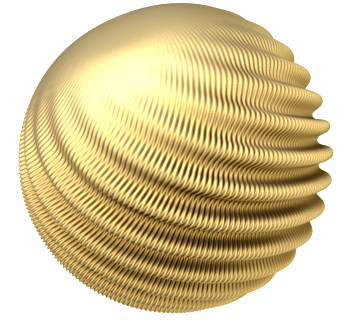 The presence of oscillations at every scale on the reduced sphere evokes the fractal geometry of Benoît Mandelbrot. There is, however, an important shade. The fractals are placed at the bottom of the regularity scale at the C⁰ level, while the reduced spheres are positioned at a higher level at the C¹ level. Even though reduced spheres resemble fractals very much, their geometric structure is not the same. No more than that of a usual surface for that matter. It is intermediate. We speak of C¹ fractals. 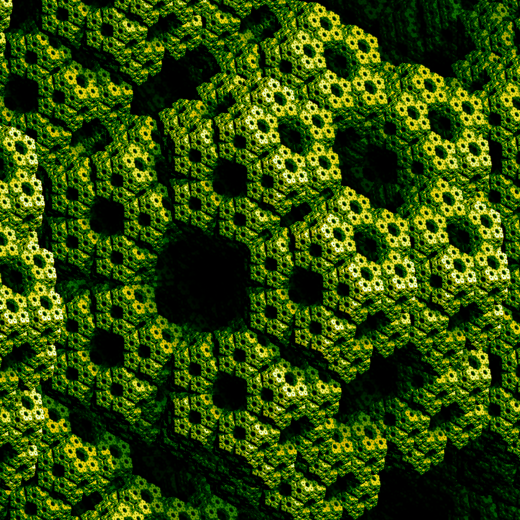 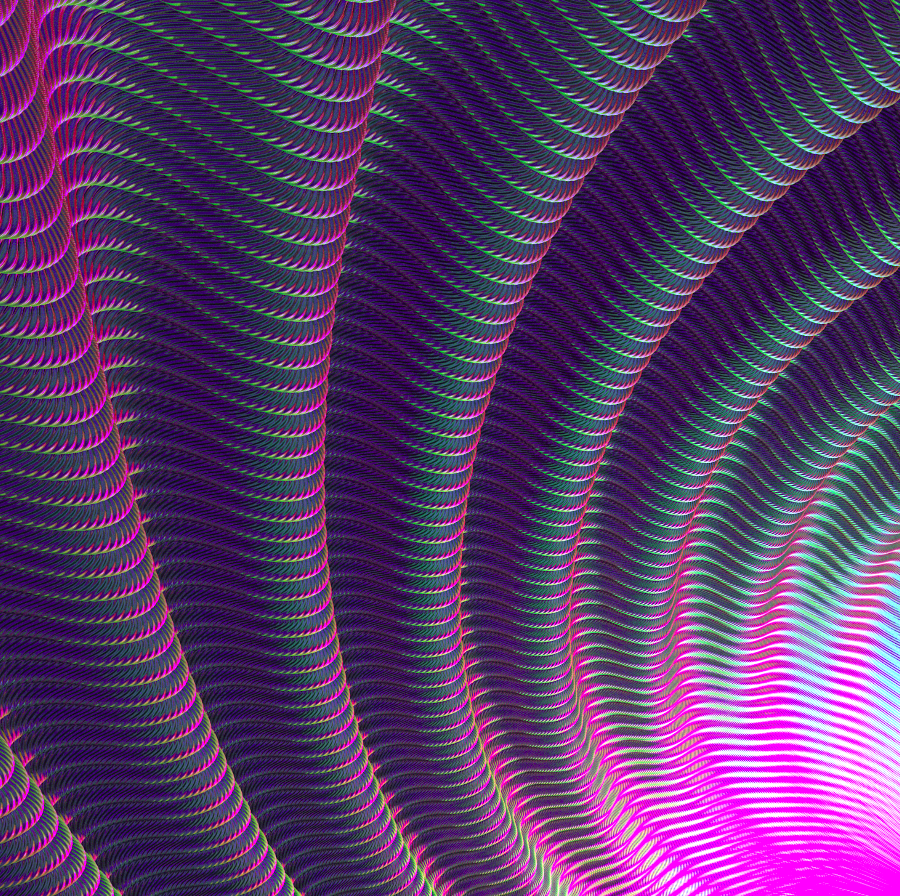 From one geometry to another

The oscillations do not cover the whole reduced sphere, they are present on a broad equatorial band but absent on the two caps. Since the latter have not undergone any deformation, their geometry remains that of an ordinary round smooth sphere. This means that a traveler departing from the North Pole and heading for the equator will cross a latitude where brutally but imperceptibly geometry is completely changed. How is that possible? The phenomenon is very similar to the one the same traveler would encounter if he crossed from left to right the Von Koch surface represented below. This surface is delimited by two horizontal planes which are the analogous of the polar caps on the sphere. The central part plays the role of the equatorial band. As soon as the hiker crosses the foreground, the hiker enters the fractal zone but it is imperceptible as the fracture scales are small. As it advances, larger fractures appear and raise the existing fractures and the fractal structure is increasing in magnitude to culminate at the center of the surface.

On the sphere, the fractures are replaced by oscillations which appear in an increasing order of amplitude, the strongest being observed in the vicinity of the equator. The C¹ fractal structure is associated to a spatial expansion phenomenon, it is imperceptible in contact with the cap and maximum at the center of the equatorial band. This is what we have called C¹-fractal expansion. 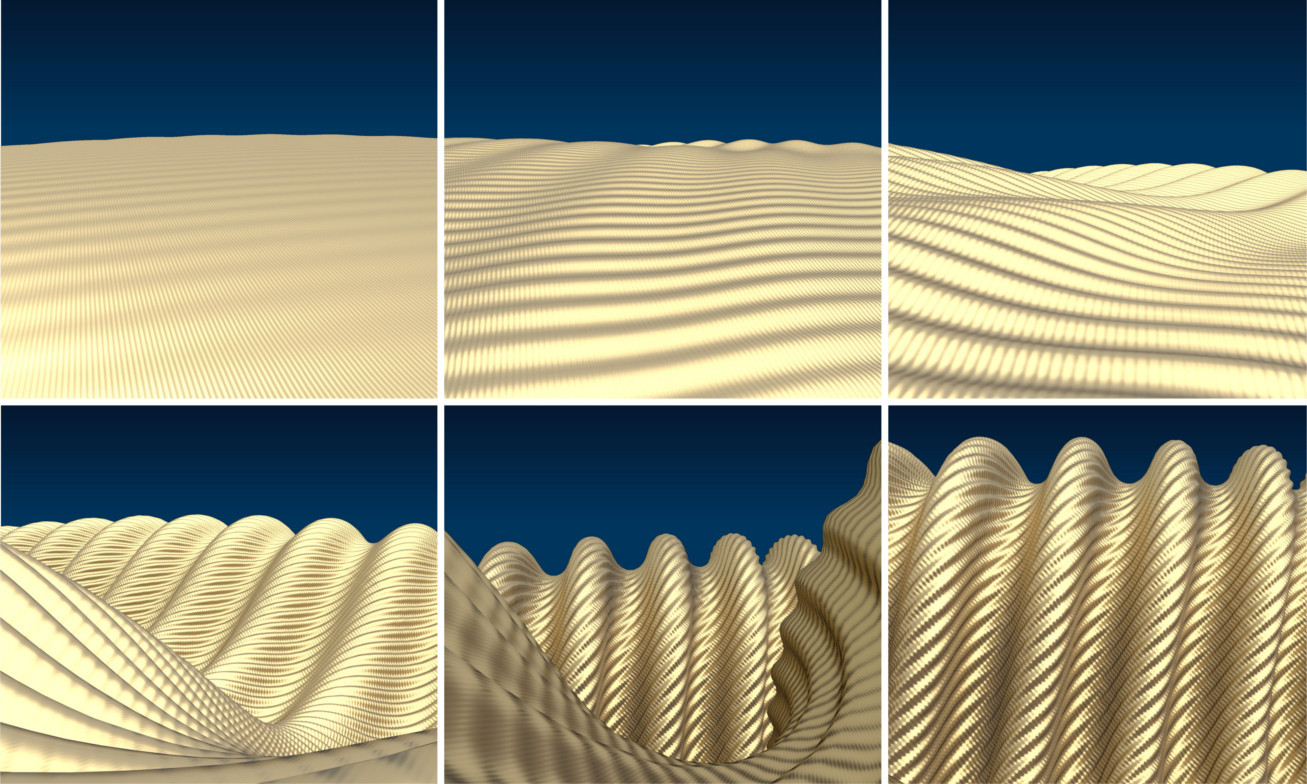 A terrestrial globe at scale 1

Let us return to the original problem. It is thus possible to reduce isometrically a sphere and to place it inside a smaller sphere. Is there a limit to this reduction? The answer is no. In the images presented here the reduction factor is about two, but it could be chosen arbitrarily large. As an example and modulo some adaptations, the construction described in this page makes it possible to start from a terrestrial sphere and to reduce it without modifying any length to transform it into a terrestrial globe that one can put on his office desk. Certainly the realization of such a globe would face inextricable practical problems but it does not matter ... one can now dream it from the digital images that the computers will build. To dream with open eyes. 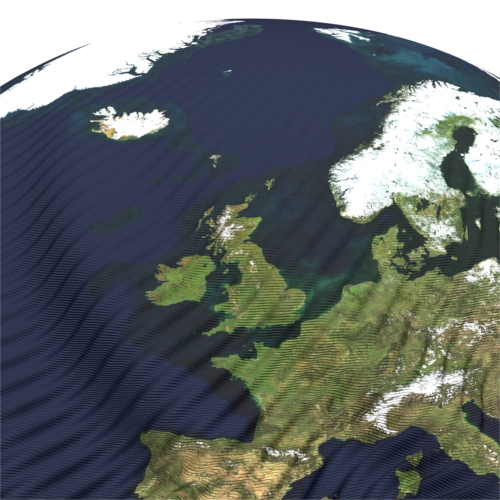 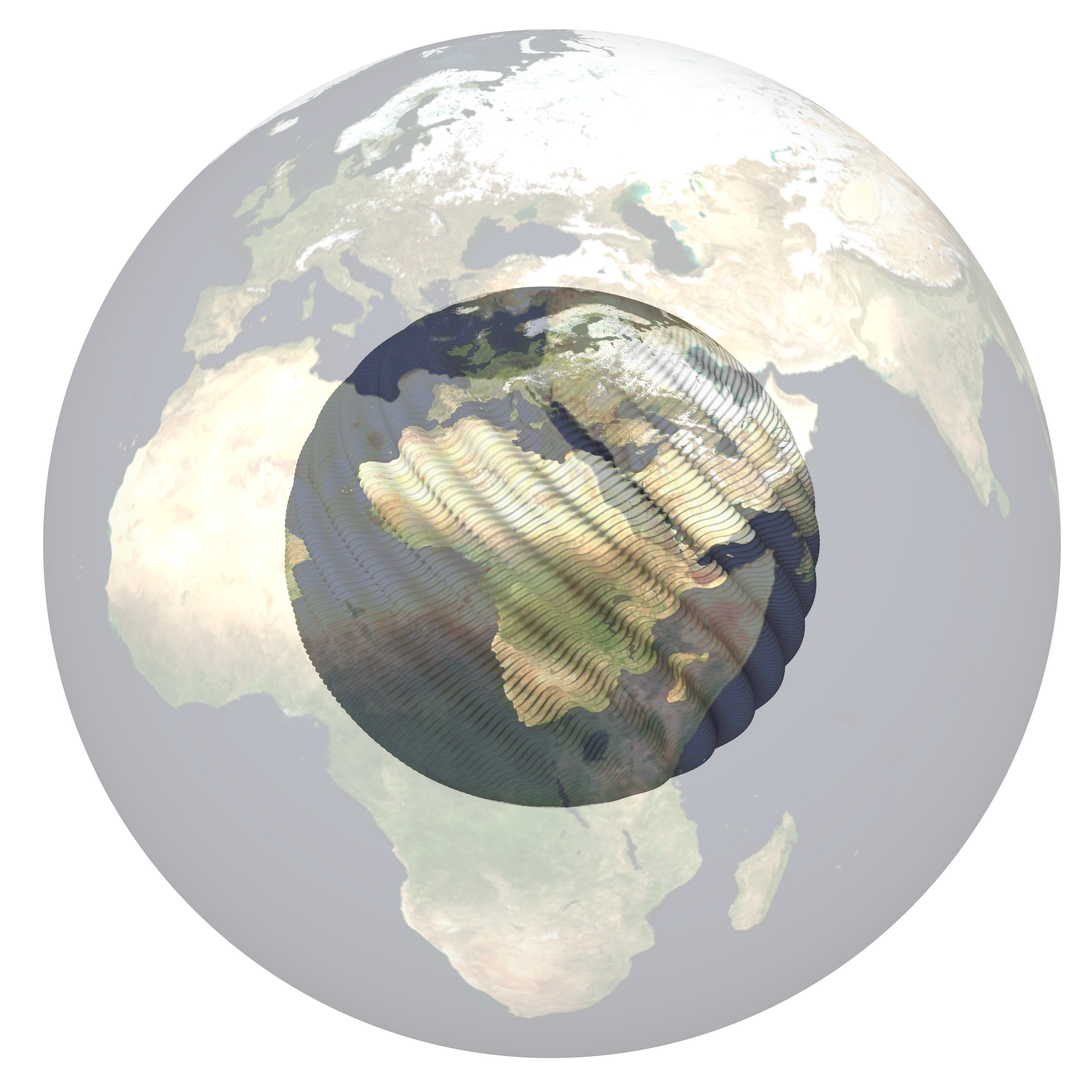